“When I first began eating vegan…23 years ago…I was sad because I was hungry. I wanted to eat food — a lot of it,” chef 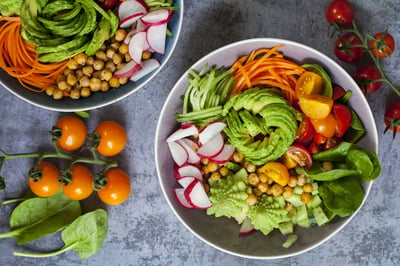 The biggest thing to hit the world of meat substitutes is the Impossible Burger. It’s made from wheat and potato proteins, coconut oil, soy and an iron-containing molecule called heme — the same molecule that creates “the explosion of flavor and aroma when you throw a burger on a grill,” explains Pat Brown, founder and CEO of Impossible Foods.

In 2018, iconic burger chain White Castle added the Impossible Sliders to its menu, receiving rave reviews. “It’s one of the country’s best fast-food burgers, period,” Eater declared. Impossible “meat” can go high-end, too; Umami Burger’s $16 Impossible Burger is one of the most popular items on the menu.

Globally, the meat substitute market is expected to register a compound annual growth rate of 7.5 percent by 2022, with a total value of USD $5.81 billion. Beef isn’t the only protein being pushed aside by plant-based alternatives.

“When you talk about protein, one of the things people really like is eggs, and it’s been one of the holy grails in the plant-based world,” said Steve Heeley, CEO of California chain Veggie Grill. A new solution is Just Egg, a vegan substitute that’s made from mung beans and scrambles just like a real egg. Veggie Grill’s Just Egg burrito was launched as an LTO and rapidly became a popular permanent menu item.

Another big trend: vegan sushi and poke bowls. Here’s a genius vegan substitute for raw tuna: watermelon compressed in a commercial vacuum chamber sealer, such as the PrimaVac™ line from Hamilton Beach Commercial, and infused with savory ingredients, such as nuoc cham and soy. The process makes it firm, like fish, and beautifully translucent.

“I love smoky flavors, and when I went vegan, I still wanted to eat all the foods that I enjoyed,” Jeff Ridabock, owner of Homegrown Smoker, told Thrillist. “As I got into this over the years, I realized I could apply all traditional-type barbecue methods to vegan foods.” His Portland, Oregon restaurant serves vegan barbecue with all the flavor fireworks of traditional soul food: sweet and smoky tempeh ribs; zesty Mac-No-Cheese; crispy fried “fish”; grilled and sauced soy curls.

Chef Petersan, of Fare Well and Sticky Fingers Sweets & Eats, offers some priceless advice to restaurant operators that want to add plant-based menu items: “Cater to your core group, but make it good enough that people outside of that group will like it. That’s why we started with baked goods and not burgers. A cookie is a cookie. If it looks good, you’ll eat it. If it tastes delicious, you’ll eat it again.”

Almost any dessert can be made vegan, but some are guaranteed crowd pleasers. These include vegan donuts (like those made by LA’s Donut Friend), vegan cupcakes (like Erin McKenna’s Bakery in NYC, where everything is also gluten-free and kosher), and vegan cinnamon rolls (see the success of Cinnaholic, which was featured on “Shark Tank.”)

Have you developed a unique plant-based menu? Tell us about it! We’re always looking for foodservice innovators to feature in this space.