A fresh perspective on produce-driven cocktails

Call him a cocktail chef: a self-taught alchemist who has perfected the art of combining fresh herbs and produce with liquor to make garden-crisp cocktails. Through his company, Eat Your Drink, he now serves as a consultant and bartender for high-profile clients. He shared his expertise on creating and successfully launching an innovative produce cocktail program.

The evolution of a cocktail chef

After a career in sales and catering, Biancaniello found a position as bartender at a bar in Hollywood. He enjoyed the work, but not the cocktails: "These drinks aren't worth 15 dollars," he thought. So Biancaniello began experimenting. 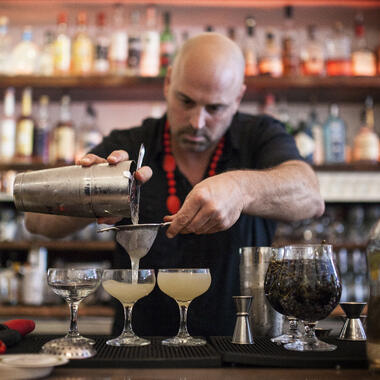 Growing up in Boston, Biancaniello watched his Greek and Italian grandparents tend backyard gardens where they grew the vegetables and herbs that tasted like home. He began visiting local farmer's markets in Los Angeles, where he spent his own money — up to $400 per week — on fresh and unusual ingredients such as Surinam cherries and Peruvian black mint.

His produce-inspired cocktails won a following at the Library Bar at the Hollywood Roosevelt Hotel, as well as several awards, and Biancaniello continued developing new drinks. He obtains his ingredients from two kitchen gardens, including one at Geri Miller's Cook's Garden Nursery, from the farmer's markets he visits three times a week, and from foraging in the mountains around Los Angeles. "Where my passion leads is trying to find the greatest and the freshest ingredients," he says.

To Biancaniello, tending bar is more than a job; it's a way to rescript his relationship with alcohol. Because his mother was an alcoholic, "I grew up with alcohol being a negative thing," he says. Even today, he rarely drinks. But his concoctions of organic liquors, fresh fruits and vegetables and other ingredients occupy a new realm between cuisine and cocktails. "So there's a very deep philosophy there," he says.

How to launch a produce-driven cocktail program

As delectable as Biancaniello's drinks are, in the beginning they weren't an easy sell. "I'm sure people even laughed at it in the beginning," he admits. The Roosevelt Hotel attracted a club-going crowd of energy-drink enthusiasts, "and I had to turn every one of them around."

It's not that people don't like fresh flavors, he says. They simply have never been exposed to them. He offers a few tips for successfully launching a produce-driven cocktail program.

Listen to customers. Instead of pushing, he asked questions: "Why do you drink vodka and Red Bull?" Often he heard that it was just something people ordered out of habit, as a holdover from their college days. Biancaniello gently suggested something more complex. "I believe the vibrancy you get from fresh things can give you just as much of a high," he says.

Skip the menu. Biancaniello quickly discovered that customers were reluctant to order drinks with unfamiliar ingredients from the cocktail menu. They shunned his strawberry cocktail "Last Tango in Modena" because it contained balsamic vinegar, for instance. So "I just started giving people the drink, and they loved it."

Choose just a few ingredients for starring roles. There's no need to spend $400 per week on fresh produce. "Gravitate toward the things that excite you and get other people to be excited about them," Biancaniello advises. "If someone is obsessed with basil, do basil seven different ways." Infuse water with basil. Float basil oil on top of martini. Create a basil mojito. Even a home bartender can craft memorable drinks with few ingredients. All you need, he says, is one type of alcohol plus lime juice, agave or honey sweetener, and your choice of fresh produce.

When making blended drinks, use fresh ingredients and be sparing with the ice. The reputation of blended drinks has suffered, Biancaniello says, from bartenders using cheap syrup and an abundance of ice. Too much ice changes the composition of the drink and waters it down, he warns, but blended drinks can be revived with attention to composition and the use of fresh ingredients. He's doing just that with a summer residency at the Cliff's Edge, where he's making a blended margarita with passionfruit, mezcal, yellow nectarine juice and smoked jalapeno.

Check out Biancaniello's recipe for the Roquette, made with gin, arugula, agave syrup and lime juice.

If you have an interesting story about the drinks you offer, some recipes you would like to share with the rest of the HBC community, or an intriguing customer service experience to share, we would love to hear from you. The best stories will reference your name and your establishment, and garner you some national or even international publicity. Please share your stories here.